My favorite Mo Farah moment is pictured below from the 10,000m final at the 2016 Rio Olympics. In the 10th lap, Farah’s training partner, Galen Rupp of the US, clips him, causing him to fall. However, he quickly got back up, regained connection and went on to win the gold medal. 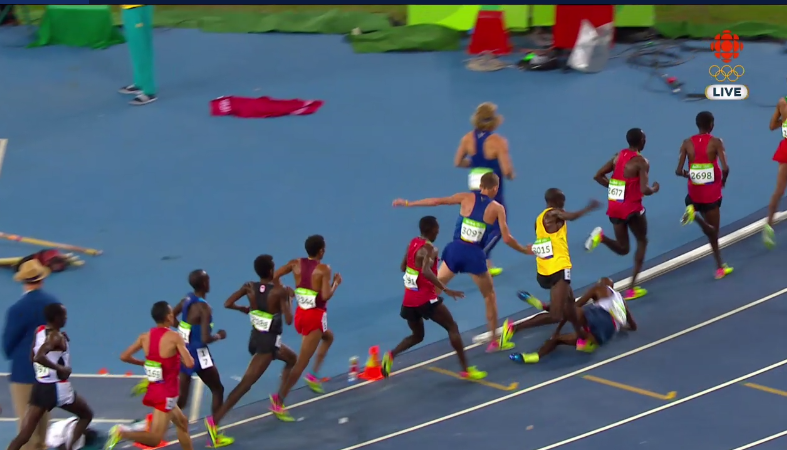 On Wednesday Mo Farah posted a picture from his 10,00m gold medal performance in the 2016 Rio Olympics, which reminded everyone that the 5,000m and 10,000m reigning Olympic champion still has his eyes set on bringing back another medal to Great Britain. Back in 2019 everyone remembers hearing his announcement that he was coming back from retirement and decided to start training to race the 10,000m at the 2020 Tokyo Olympics. Well, it seems like nothing has changed and he’s still on track to defend his crown.

On his Instagram stories you see him both pounding the dirt roads of Kenya after sipping on some pre-run coffee or ripping treadmill miles, completely drenched in sweat. Farah knows what it takes to make it to an Olympic final and be a contender for the gold medal. However, is he past his prime? Can his legs carry him to another gold medal?

Farah is now at the age of 38, which many believe to be the prime for marathon racing. Since his retirement from the track in 2017, he’s had some pretty phenomenal marathon and half marathon performances. He won the 2018 Chicago Marathon in a time of 2:05:11 and then finished 5th at the 2019 London Marathon with a time of 2:05:39. For the half marathon, he just posted a time of 1:03:07 at the Djibouti International Half-Marathon for the win. While he won, this performance is significantly slower than his top marks set in 2015 (59:32) and 2016 (59:59). Is he losing his speed? Now while he still has run elite performances in the Marathon and Half-Marathon it doesn’t mean he’s ready to hop back on the track. Yes, the 10,000m is the longest event on the track, but it still requires a certain quickness, especially for the Bell-Lap.

As everyone knows, his final kick is his strength. In both London and Rio, Farah stayed in the back until the very end, where he moved up methodically, placing himself in the perfect position to strike, and when the bell lap sounded, he unleashed his scorching kick to win.

With Farah’s focus on the Marathon/Half-Marathon distance since 2017, he’s aerobically strong, but does he still have the anaerobic track speed in his legs?

During the time frame of 2012-2017, Mo Farah failed to lose a 10,000m race. Can he keep this perfect achievement alive with another win in Tokyo?

What do you think?